2019 Grammy Awards: How to stream online or watch on TV

The 61st annual Grammys will air live Sunday evening 8 p.m. ET on CBS. Alicia Keys, a 15-time Grammy winner, will be hosting the event in Los Angeles for the first time in her career. She’s the first woman to host the show in more than a decade.

After backlash over the lack of female nominees last year, 2019 sees mostly young women in the best new artist category and five women competing with three men for album of the year.
“I know what it feels like to be on that stage, and I’m going to bring that vibe and energy,” Keys said in January when the Recording Academy tapped her as host. “I’m so excited to be the master of ceremonies on the biggest night in music and celebrate the creativity, power and magic. I’m especially excited for all the incredible women nominated this year! It’s going UP on Feb. 10!”

How to watch the Grammys 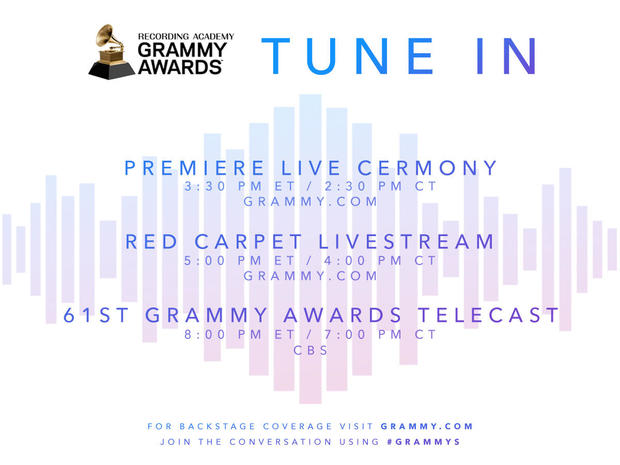 This will be Alicia Keys’ first time hosting the ceremony — which is returning to the West Coast this year — but it won’t be her first time on the Grammy stage. She has won 15 Grammys in her career.

“A dynamic artist with the rare combination of groundbreaking talent and passion for her craft, Alicia Keys is the perfect choice as host for our show,” said Neil Portnow, president and CEO of the Recording Academy. “Throughout her exciting career, I have watched her become a powerful force within the music industry and beyond. As an artist who speaks to the power of music for good, a role model, and a spokesperson for change, we are thrilled to have her on board for what’s sure to be an unforgettable Grammy Awards.”

Keys announced that she’d be hosting the show in a video posted to her YouTube channel. The video shows her breaking the news to her family, including her husband Swizz Beatz, a Grammy winner in his own right, whom she appears to have awakened.

“Congratulations,” he said. “But you could have waited till I got dressed.”

Grammy.com will host a premiere ceremony ahead of the show, starting at 6:30 p.m. ET, featuring host Shaggy along with presenters Lzzy Hale and Questlove handing out the first prizes of the day.

Who’s nominated for Grammys this year?

Kendrick Lamar and Drake are the top Grammy contenders, with Lamar earning eight nods and and Drake seven. Brandi Carlile is up for six awards, while Lady Gaga, Cardi B, Maren Morris and H.E.R. each have five nominations.