According to LCSO, members of LCSO alongside Fort Myers Police Department acted on a search warrant at a home in Fort Myers at 3417 South Street.

During an investigation leading up to the search warrant, detectives made several purchases of drugs from Jabari Hampton, 18. 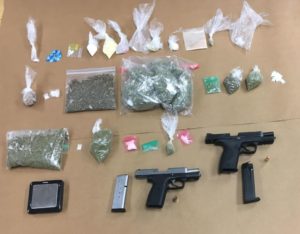 The investigation led to an additional arrest of Theodoric Moran, 41, for possession of cocaine.