“Suspicious packages” found at U.S., other consulates in Australia

Source: Some explosives mailed from Florida

“Suspicious packages” found at U.S., other consulates in Australia

CNN says authorities now believe several of the packages went through the Opa-locka, Florida, processing and distribution center, according to two law enforcement officials familiar with the investigation.

NEW: Law enforcement sources tell CBS News that some of the packages were mailed from Florida; there are currently investigators on the ground in Florida following leads, as scores of other investigations in NY & elsewhere track down information & tips in the nationwide manhunt.

The officials said the devices were not rigged like a booby-trapped package bomb that would explode upon opening. They had timers and batteries but never went off. Law enforcement officials were still uncertain whether the devices were poorly designed or never intended to cause physical harm. The officials spoke on condition of anonymity because they were not authorized to discuss the ongoing investigation by name.

At a press conference Thursday, officials in New York stressed they were still treating the packages as “live devices.”

On an app? Click here to view the map

“As far as a hoax device, we’re not treating it that way,” said Police Commissioner James O’Neill.

At the briefing, authorities confirmed that at least some of the packages were distributed through the U.S. mail. They said investigators searching for additional suspicious parcels had not found any during the previous eight hours.

The new discoveries brought to 10 the number of suspicious packages targeting Democrats but intercepted by authorities this week.

Much was still unanswered about the devices and authorities have said nothing about suspects. Details suggest only a broad pattern — that the items were packaged in manila envelopes, addressed to prominent Trump critics and carried U.S. postage stamped. Some were discovered in mail processing facilities. Officials said the devices are being examined by technicians at the FBI’s forensic lab in Quantico, Virginia. 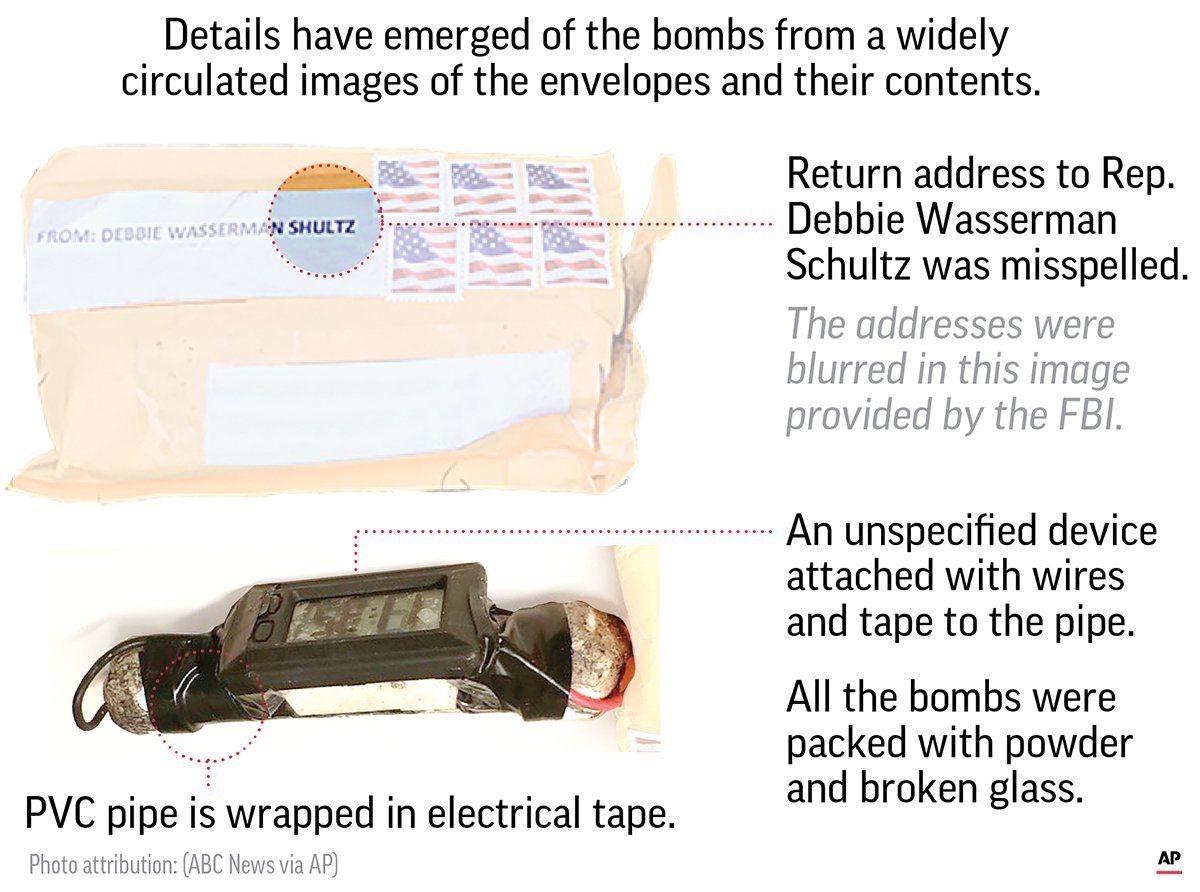 The packages stoked nationwide tensions and fears two weeks before major congressional midterm elections. Even with the sender still unknown, politicians from both parties used the moment to decry a toxic political climate and lay blame.

“A very big part of the Anger we see today in our society is caused by the purposely false and inaccurate reporting of the Mainstream Media that I refer to as Fake News,” Trump said on Twitter. “It has gotten so bad and hateful that it is beyond description. Mainstream Media must clean up its act, FAST!”

Former CIA Director John Brennan, the target of one package sent to CNN, fired back.

“Stop blaming others. Look in the mirror,” Brennan tweeted. “Your inflammatory rhetoric, insults, lies, & encouragement of physical violence are disgraceful. Clean up your act….try to act Presidential.”

The list of bombing targets spread from New York, Delaware and Washington, D.C., to Florida and California.

The explosive devices were packed in envelopes with bubble-wrap interiors bearing six American flag stamps and the return address of Florida Rep. Debbie Wasserman Schultz, the former chairwoman of the Democratic National Committee who was accused by Clinton rivals of secretly helping the party’s eventual presidential nominee.

The bombs seized Wednesday, each with a small battery, were about six inches long and packed with powder and broken glass, according to a law enforcement official who viewed X-ray images. The official said the devices were made from PVC pipe and covered with black tape.

The packages discovered Thursday set off a new wave of alarm.

Two officials told The Associated Press that a person working at De Niro’s Manhattan office called police after seeing images of a package bomb sent to CNN and recalling a similar package addressed to the actor. De Niro’s office is located in the TriBeCa Film Center in lower Manhattan, and also includes an upscale restaurant and private screening room.

New York City Mayor Bill de Blasio said the packages were “clearly an effort to terrorize people politically, to choose people for political purposes and attack them because of their beliefs.”

The packages addressed to Biden were intercepted at Delaware mail facilities in New Castle and Wilmington, according to a law enforcement official who, like others, wasn’t authorized to discuss the investigation and spoke on condition of anonymity. 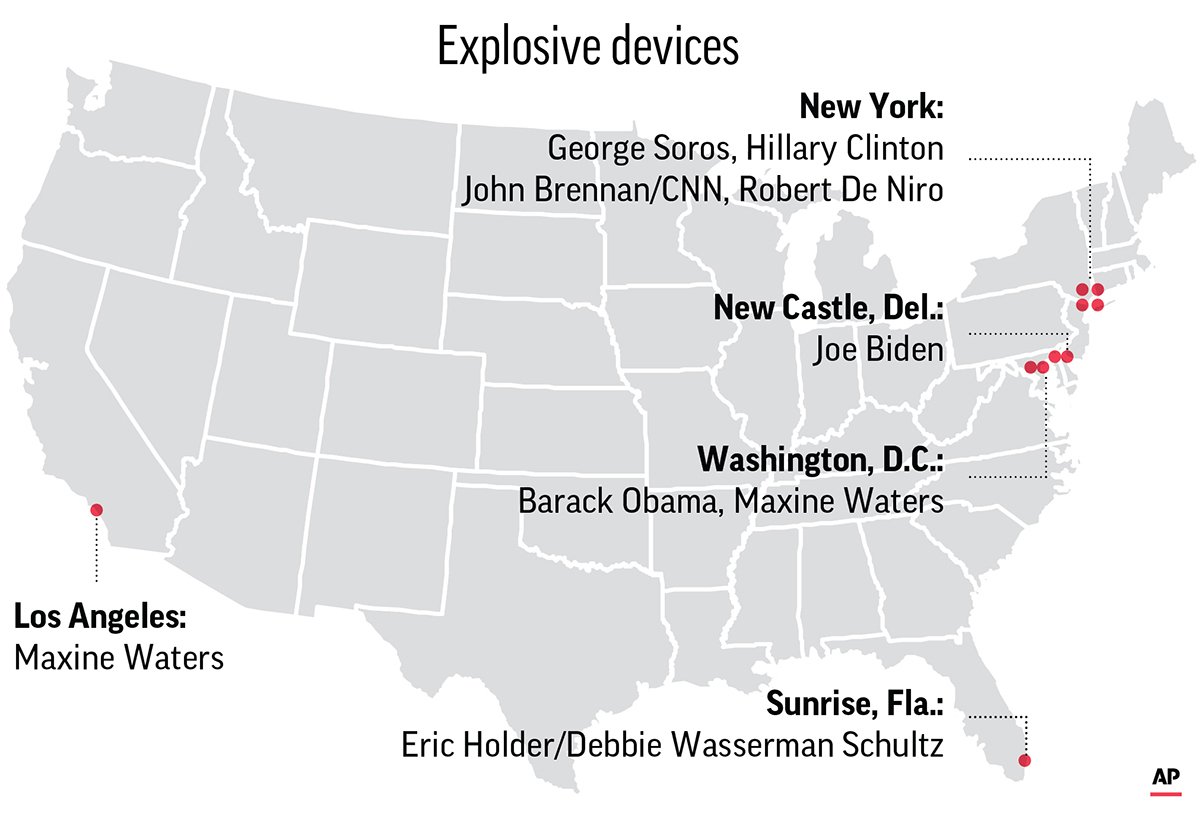 Like earlier targets, both Biden and De Niro have been sharply critical of Trump. The actor dropped an expletive insult at Trump at this year’s Tony Awards and also apologized to Canadians for the “idiotic behavior of my president.” Biden said last week that the president may not “know what he’s doing” and coddles dictators.

The first crude bomb to be discovered was delivered Monday to the suburban New York compound of George Soros, a liberal billionaire and major contributor to Democratic causes. Soros has called Trump’s presidency “dangerous.”

Similar packages addressed to Hillary Clinton and former President Barack Obama were intercepted on their way to Chappaqua, New York, where the Clintons live with former President Bill Clinton and to Washington, where Obama lives with his wife, Michelle. The Secret Service said neither package reached its intended recipient.

Others were sent to frequent Trump critics Rep. Maxine Waters, D-Calif., and former Obama Attorney General Eric Holder. His ended up at the Florida office of Democratic Rep. Debbie Wasserman Schultz, who was listed as the return address.

A police bomb squad removed the package addressed to Brennan from CNN’s New York office, which was evacuated.

As the scope of the attack became clearer Wednesday, Trump decried political violence during a scripted event in the White House East Room, and other members of the administration said violence has no place in American society.

Later at a rally in Wisconsin, he urged unity.

“Let’s get along,” he said. “By the way, do you see how nice I’m behaving tonight? Have you ever seen this?”

But at the same event, he blamed the news media and on Twitter Thursday kept up the argument that the media play a role.

“Acts or threats of political violence have no place in the United States,” Trump said.

Democratic Senate and House leaders Chuck Schumer of New York and Nancy Pelosi of California said such words “ring hollow” when coming from Trump. They noted the president’s recent praise of a GOP congressman who body-slammed a reporter, among other pugnacious statements.

“The president is certainly not responsible for sending suspicious packages to someone no more than Bernie Sanders was responsible for a supporter of his shooting up a Republican baseball field practice last year.”

James T. Hodgkinson, 66, was shot and killed by police after he opened fire on congressional Republicans practicing for their annual charity baseball game against Democrats in 2017. Hodgkinson’s widow said he had been a supporter of Vermont independent Bernie Sanders in 2016.