Bruno to be released on bond after facing judge

Bruno to be released on bond after facing judge

A Lakeland, Florida, city commissioner is facing a second-degree murder charge in the fatal shooting of an alleged shoplifter at his military surplus store Oct. 3. Michael Dunn, who was inaugurated to a four-year term in office in January, appeared in court Monday to request bond, CBS affiliate WTSP reports.

Dunn was booked into Polk County Jail on Friday night without bond  after a Polk County grand jury indicted him for second-degree murder. Several days earlier, the State Attorney’s Office had  released surveillance footage of Dunn’s encounter with Christobal Lopez, 50, who was shopping with his father at the Vet Army Navy Surplus store. 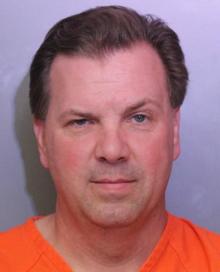 According to a police affidavit, the video shows Lopez take a hatchet and hide it under this clothing before being confronted by Dunn. The affidavit states that Dunn saw Lopez take the hatchet and questioned him about paying for it. Then the item fell down Lopez’s pants, at which point, according to witnesses, Lopez said, “I will pay! I will pay!” But he didn’t and tried to hastily exit from the store.

The video shows Dunn, who at this point is armed with a gun, grabbing Lopez by the shirt as he attempted to walk out the door. Dunn then raised his gun and fired the weapon, striking Lopez two times. He was later pronounced dead at the scene.

Based on testimony from witnesses, Lopez made no verbal threats against Dunn, the affidavit said. Police said Dunn admitted in an interview that he shot Lopez twice because he was stealing from his business.

Dunn also didn’t attempt render aid to Lopez, according to the affidavit. When officers arrived on the scene, he was still pointing his weapon at Lopez and told them, “I think he expired!”

The fatal shooting comes amid scrutiny over the state’s controversial “stand your ground” law, which says a person can use deadly force “if the person reasonably believes that such conduct is necessary to defend himself or herself or another against such other’s imminent use of unlawful force.” After backlash in another case, in August, a man was charged with manslaughter for the shooting death of a father of three who shoved him in a parking lot.

“I have determined in this case, and the actions of Mr. Dunn fall outside the protection of stand your ground law,” Haas said.

“This situation was commenced and started, not by Michael Dunn,” Franklin added. “Someone made a choice to shoplift.”

It’s unclear what’s going to happen to Dunn’s commission seat. That decision could be left up to his fellow commissioners or the governor, who has the power to suspend a public official who breaks the law.

Dunn is scheduled for a court arraignment on Nov. 6, WTSP reports.

In Florida, a person convicted on a second-degree murder charge could face up to life in prison or life on parole, along with a fine of up to $10,000. When a weapon is involved, as was in this case, there’s a mandatory sentence of 25 years in prison if convicted.