The gator was spotted near Lover’s Key. It was seen swimming around in the water and then walking along the beach. 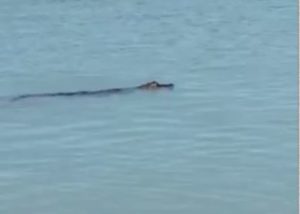 Captain Jessica DeGraw, with Island Time Dolphin & Shelling Cruises Inc., says she was taking a family of five out on a cruise near Big Hickory Preserve when they spotted the gator swimming nearby.

“I told them if he comes up on shore, we want to step back so we kept kind of just inching back as he stepped on the beach and I said if he comes up here, he can run faster than we can!” DeGraw said.

She says he eventually walked to the other side of the island toward the lagoon.

Marine life experts say that although it’s a rare sight, it’s not uncommon to see alligators in the Gulf. Big Hickory Preserve backs up to the Estero Aquatic Bay where fresh water meets salt water. 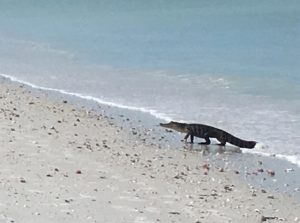 And with the recent Lake Okeechobee discharges, the water is more fresh than usual.

Still, DeGraw says it was a rare treat to see the little gator, and she was glad she didn’t miss it.

“It was a little scary…but a little exciting at the same time,” Degraw said.

Experts add that the recent water releases could be confusing gators into thinking they are swimming in fresh water. So they advise swimmers to check the water no matter where you’re going in.

See the video from Captain DeGraw below: