A look at climate change’s impact on hurricane season

A look at climate change’s impact on hurricane season

Dark water from Lake Okeechobee is inching closer and closer to the Sanibel shoreline. Because of this, some people are fighting back.

On Saturday, hundreds are expected to gather on Fort Myers Beach to protest against Lake O discharges causing that murky water on SWFL coasts. 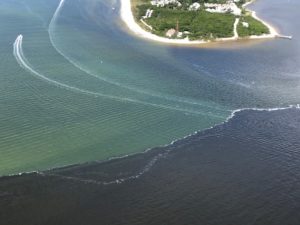 Two groups of protesters will walk the Matanzas Pass Bridge on Fort Myers Beach as well as the Roosevelt Bridge in Stuart, FL on the east coast.

Organizers plan to meet at noon at the base of the Matanzas Bridge and walk the length for three hours to send a message to lawmakers.

And new aerial views of the water quality is just making the problem worse.

“The Lake O releases will continue through the weekend into the early part of next week,” said John Campbell with the U.S. Army Corps of Engineers. 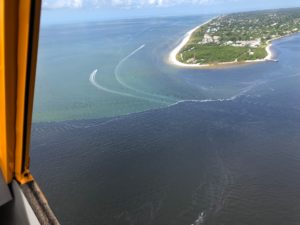 “If we don’t do this now, we’re going to lose everything. We’re getting so recognized as a dirty water community that people like Erin Brockovich are getting involved and it’s becoming a national story,” Heim said.

Brockovich, the famous consumer advocate, called the releases from Lake Okeechobee a national disaster. But the Army Corps of Engineers says they are necessary to prepare for hurricane season.

“The lake is currently above the lake stage that was in place when Hurricane Irma struck last year and it took us to an elevation of 17 feet in the span of a month. One of the reasons to do these releases early is to create some storage,” Campbell said.

But while the need is mostly understood, the results from those releases aren’t welcome.

“If you’re concerned and you’re aggravated to the point of what can I do about it. This is your opportunity to do something on FMB,” Heim said.

The organizers of the rally say they’ll also show up to the town council meeting Monday to ask the mayor of Fort Myers Beach to join the movement to halt the releases.