Zachary Rizutto and his wife Melissa welcomed their daughter Roxanne a little less than a year ago. But just a few months after her birth, Zachary got an unexpected diagnosis.

After experiencing minor blackouts, he went for an MRI and doctors located a brain tumor. A biopsy confirmed their worst fears: it was cancer.

A surgeon was able to remove most of the tumor, but cancerous cells remained in portions of his brain crucial to his vision and memory.

Oncologists recommended proton beam radiation to directly target and eradicate those cells and hopefully send the cancer into remission.

“We said we had hope all along, but I don’t think we really believed it until …. We met with those doctors that are studying this disease and they told us, you are going to have a future,” said Melissa Rizutto.

The couple chose to travel the University of Pennsylvania to start the treatment where they could stay with family because it is not available in Southwest Florida.

Before they could even get started, United Healthcare denied coverage for the procedure which will total around $125,000.

The procedure is painless and approved by the Food and Drug Administration. Proton beam radiation therapy uses energized particles targeted just at the cancer cells, minimizing side effects to the other healthy parts of a patient’s brain.

What is proton therapy?

Right now, it’s used to treat things like prostate, brain, breast and lung cancers with fewer side effects like nausea and vomiting.

Dr. Naren Ramakrishna works with patients in the University of Florida Cancer Center at Orlando Health, one of only three sites in the entire state where the treatment is available.

“The precision of the beam is within less than a millimeter of accuracy,” siad Dr. Ramakrishna, “Proton therapy represents one of mankind’s greatest achievements.”

Though it’s been approved for more than a decade, the locations providing treatment are few and far between, “There are only 60 centers in the world doing this kind of treatment right now, so it does put us in quite elite company,” Dr. Ramakrishna said.

Dr. Robert Lustig, the radiation oncologist treating Zachary, said proton therapy allows him to target just cancer cells and not put the healthy parts of the brain at risk for potentially long-term side effects.

“The insurance company is saying, ‘the best is not what we approved you’re getting good enough”, he said.

The treatment is actually covered by Medicare and Lustig said payment is routinely approved for pediatric patients.

He and oncologists around the country say they are routinely seeing private insurance companies deny coverage for patients like Zachary, who are in the most productive years of their life.

The treatment is only available in Florida at cancer centers in Miami, Jacksonville and Orlando. 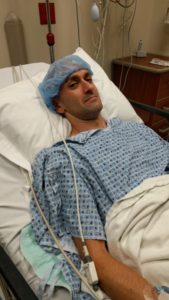 At the University of Florida Proton Therapy Institute in Jacksonville, the executive director said that as many as 60 to 70 percent of patients will have to file appeals with their insurance company to get it covered.

Stuart Klein said some even have to go as far as taking their cases to administrative law judges to get proton treatment covered.

A Seattle man with brain cancer sued his insurance company in 2015 and settled out of court to get proton therapy covered. His attorney said the disease is now in remission.

“Part of the problem was three or four years ago, we were very heavily oriented towards prostate cancer, which is a very slow growing disease you have the luxury of time to fight with the insurance company,” said Klein, who said he is now seeing more and more patients with brain and breast cancer have to fight for coverage.

America’s Health Insurance Plans, the political advocacy group for the health insurance industry, points to research regarding prostate cancer as an explanation for why companies deny coverage for proton therapy.

“A proton beam machine can cost as much as $200 million and studies have not shown that it produces any better outcomes than traditional treatments for prostate cancer,” said Cathryn Donaldson, a spokesperson for AHIP in an email.

Donaldson added that any time more expensive therapies are recommended it leads to rising costs for everyone.

Rizutto and his wife raised more than half of the cost of treatment on a Go Fund Me page. He began therapy in mid April which will last for six weeks.

The couple will have to pay the remainder of the balance on the treatment within six months.

Obamacare enrollment reopens for Americans in need of coverage amid pandemic

State Road 29 shut down due to flooding between LaBelle, Palmdale