Since 1987, Florida has paid out $11 million to more than 300 state workers who say they were sexually harassed while at work.

Out of all the state agencies, the Department of Corrections has paid out the most in settlements: more than $5 million. 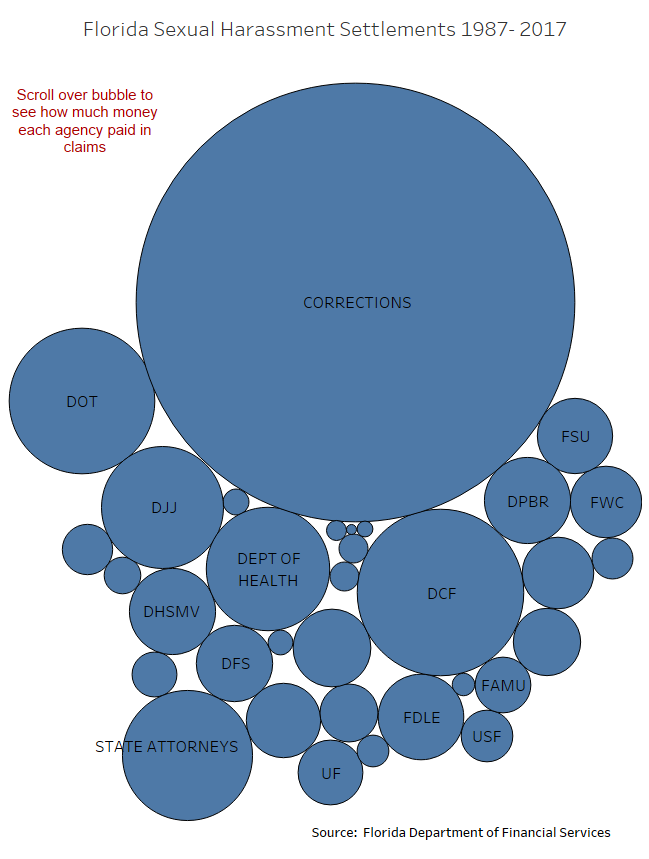 Claims of sexual harassment within DOC

The DOC has paid settlements related to 181 sexual harassment claims since 1987. One of the biggest payouts happened in 2010, and included more than 100 current and former workers throughout the state’s prison system.

A jury found the DOC liable under Title IV because it “unreasonably failed to remedy sexual harassment by its inmates.”

The DOC appealed the decision but a judge agreed with the jury, and the DOC paid settlements totaling more than $1.14 million.

A large number of plaintiffs in the suit were medical health professionals hired to care for the inmates.

“It made it difficult to do our job,” said one woman, who worked as a nurse at Charlotte County Correctional Institute, but did not want to be identified.

“We were their peep show,” they said.

They also said some guards would not work to prevent the behavior, and there was no real punishment if a disciplinary report was written for it.

“People in the community could get arrested for it, but in that community it was accepted. It was beyond ironic,” said a former mental health counselor who said she joined the lawsuit because she felt victimized.

All the women said they hoped the lawsuit would spark change.

Two of the women who spoke on the record to WINK News said immediately following the suit there was no real change at the prison.

A current employee who spoke to WINK News by phone, said the problem persists at Charlotte County Correctional Institute.

Prosecution for the crime is now a real possibility.

Lawmakers passed a bill in 2010 that made it illegal for inmates to commit lewd or lascivious acts in front of employees.

Only seven prisoners have been convicted of the crime in Charlotte County, and no one from that prison has been charged with the crime in the last five years, according to court records.

However, the DOC said it has written 99 disciplinary reports at Charlotte Correctional Institute in relation to ‘gunning’ for 2017. Gunning is when an inmate intentionally masturbates in front of prison staff. They claimed in the years prior to the law change more than 300 reports were being written at this prison every year.

Are employees still harassed by inmates at DOC?

DOC Secretary Julie Jones was appointed in 2015 and did not run the department when the lawsuit was settled.

“At the time these occurred, this was remedied in policy, so the policy was fixed back in 2009,” Jones said. “What we’ve been doing since, we monitor this situation very closely we take it very seriously, and every year we examine all our policies in stay accredited.”

However, the DOC could not provide any policy documents or memorandum written specific to preventing inmates from gunning, or how to warn staff. Training documents updated in 2013, include the 2010 Florida Statute and reference to discipline procedures.

“If you take a problem serious, you document it. You have transparency. (If there was) new policy implementation you would be able to see the records for that,” said Scott Johnson, a forensic psychologist who trains law enforcement about sexual offenders.

He said there should be better training for staff, and proper penalties so it’s not a recurrent pattern.

Jones said the issue is happening less often because of the discipline that’s in place.

“Everyone that works in a prison is trained on how to deal with this particular situation, and we warn our staff — for someone that has a proclivity for this activity and we have shields that they can work behind,” Jones said. “We monitor the situation very closely and we’re very clear with inmates,” she said.

Click here to see a full list of how much money Florida’s state agencies have paid out in Sexual Harassment claims.