The comment from an account attributed to Linda Deverso-Pakulis appeared underneath a video showing a fight Sunday at the Edison Mall. 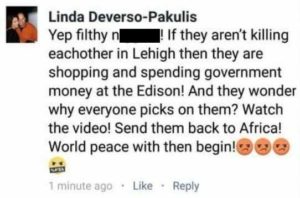 “Yep filthy [expletive]! If they aren’t killing eachother in Lehigh then they are shopping and spending government money at the Edison! And they wonder why everyone picks on them? Watch the video! Send them back to Africa! World peace with then begin!”

The Lee County Sheriff’s Office is “looking into it,” according to sheriff’s office Sgt. Anita Iriarte.

Marceno declined to answer whether the lieutenant is being investigated as part of the probe.

Cybersecurity expert John Benkert said if Deverso-Pakulis was hacked, she would be able to find out by checking her security settings on Facebook.

“If they can still login, then you should be able to tell by the logins and where they came from,” Benkert said. “It’s pretty easy to tell if it came from a different IP addres than what they’re used to seeing.”

Benkert says that this kind of post doesn’t match up with typical hacking behavior.

“It doesn’t sound like a hacker from Russia or China, or California hacking into somebody’s computer just to make a Facebook post, that’s pretty uncommon,” Benkert said.