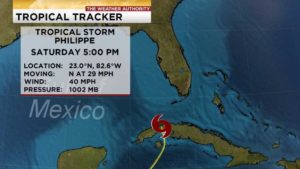 “After organizing into a depression earlier, the system has now strengthened into Tropical Storm Philippe,” WINK Meteorologist Zach Maloch said. “But the rain we see right now is because of a cold front that will also keep Philippe southeast of our area.”

The system had maximum sustained winds of 40 miles per hour as of the 5 p.m. advisory and was moving north at 29 miles per hour, the hurricane center said. It was about 20 miles southwest of Havana, Cuba.

Tropical Storm Philippe is the 16th named storm system named of the year.

Once its north of Cuba the system will start to encounter stronger vertical wind shear as the storm passes over or near south and southeast Florida Sunday morning.

The tropical system will interact with the eastward moving cold front and ride that front northward on Sunday.

*Information from the Associated Press was used in this report.