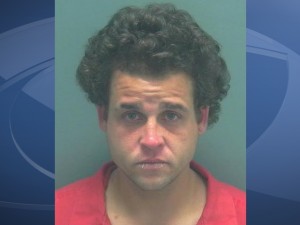 FORT MYERS, Fla.- Authorities are still searching for the suspect in a home burglary that took place early Thursday.

Police say Hill broke into a home on McGregor Boulevard overnight and stole a television. According to authorities, he then left the scene in the victims’ four-door Hyundai that was parked in the driveway.

Hill has active felony charges through FMPD for occupied burglary, theft of a motor vehicle and grand theft.

Hill is a white male with a thin build and light complexion. He is 6 feet, 6 inches tall and weighs approximately 180 lbs. He has medium length, curly brown hair. Hill is a known drug abuser with numerous prior arrests for burglary and larceny related offenses.