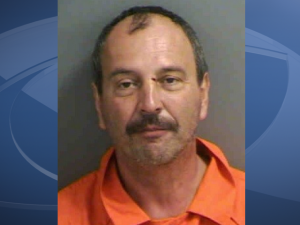 COLLIER COUNTY, Fla. – A Naples man is behind bars after bizarre behavior, which ended with him reportedly stealing a woman’s car out of her driveway.

An arrest report from the Collier County Sheriff’s Office states 52-year-old Robert Pekar stole the car on New Year’s Day in the 1300 block of Ingraham Street.

According to a witness, the man was first spotted in a backyard pool, rubbing ashes from a fire pit on his face. The homeowner asked if she could help him and that was when he reportedly took off.

Just 15 minutes later, another witnessed spotted the same man in a white Buick leaving a driveway. The witness stated the man said to him “Happy New Year” and left.

The Buick’s owner said she had left her car running in her driveway and went back inside to grab something. When she returned her car was gone.

Several neighbors stated they saw the same suspect running around the area screaming he was an “Indian and he was 400 years old” prior to the incident. Neighbors stated the suspect was a white man wearing a Hawaiian shirt with ripped brown shorts and no shoes.

Pekar is being held on Grand Theft Auto.