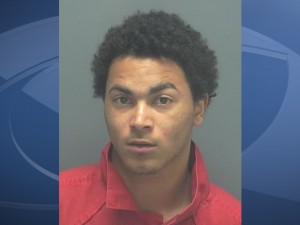 FORT MYERS, Fla.- Police say a man who reported a false burglary is now behind bars.

The Fort Myers Police Department responded in November to a past-occurred report of a residential burglary at an apartment on the 2200 block of Central Avenue.

The victim, 19-year-old Joshline Cob, allegedly told police his 70-inch television was taken from his apartment.

According to authorities, Cob showed officers pry marks on his front door as well as an unsecured sliding glass door which was made to be a possible point of entry for the burglar.

During an investigation, officers discovered Cob was renting to own the television from Aaron’s on Cleveland Boulevard.

Detectives eventually learned Cob had a neighbor hold the television in their apartment while the fraudulent burglary was called in.

“This crime is something we’ve seen often. People will rent an item, make a few payments and report it stolen in an attempt to avoid remaining payments,” said property crimes Detective Jimmy Hernandez.

Cob was arrested on for false reports to law enforcement.

“Knowingly giving false information to law enforcement concerning the alleged commission of a crime is a complete waste of precious time and valuable resources,” said police spokesperson Lieutenant Victor Medico. “We will investigate such instances with a zero tolerance.”